An interview with the researcher George Meseșan, from the Institute of Robotics and Mechatronics, German Aerospace Center (DLR).

George Mesașan is involved in the TORO project of the Institute of Robotics and Mechatronics, German Aerospace Center (DLR), since spring 2016. Passionate about robotics in general, and particularly about the current project, where he works with his fellow researchers, George Meseșan agreed to give us more information about the famous humanoid robot project.

[Diana Ciorba - D.C.] 1. What is the main objective of TORO project?

[George Meseșan - G.M.] The TORO project started in the summer of 2009 with a robot consisting of two legs and a camera mounted on top. In the following years, the robot was expanded successively with an upper body, arms, hands, and a head, such that we had a complete humanoid robot in the spring of 2013. The main objective of TORO has been from the beginning to serve as a research platform for investigating compliant (torque-controlled) locomotion. Until recently, most humanoid robots have used a position control approach for leg movement, which gives excellent precision, but is not very robust with respect to an uneven ground surface. Furthermore, it tends to generate large contact forces during disturbances, making this approach unsuitable to human-robot interactions. For example, a position controlled humanoid robot stepping on someone's foot could lead to significant injury. Torque-controlled robots, on the other hand, are compliant, i.e. they interact softly with the environment (including nearby humans), but do not have the precision of movement of position-controlled robots. In both these aspects, torque-controlled robots are more human-like, making it, in our view, the logical choice for the development of a humanoid robot. 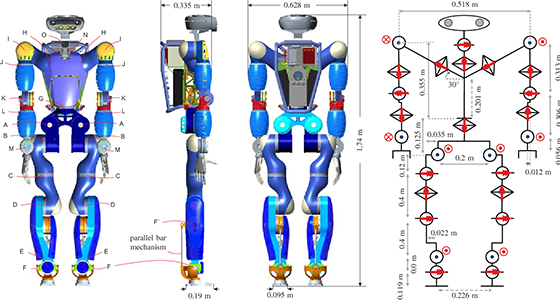 [D.C.] 2. What are the main achievements on TORO platform in the last 2 years?

[G.M.] In the last 2 years, there have been three main directions of research: torque-controlled walking, balancing, and multi-contact locomotion, where multi-contact means that the hands are also used for support during the motion. The results were presented at top robotics conferences (IROS, ICRA, etc.) or published in prestigious journals. 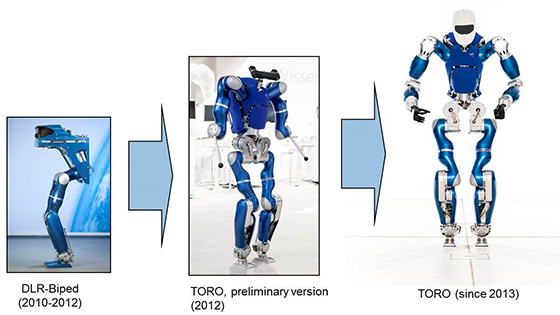 [D.C.] 3. How are the interactions with the environment controlled while the humanoid robot keeps its balance?

[G.M.] The main challenge in humanoid locomotion and balancing is, simply put, to prevent falling. Humanoid robots and humans have an elevated center-of-mass position (in TORO's case, about 95 cm above ground) and a small base of support, a situation often described as an inverted pendulum. We have made the problem even more challenging by designing TORO with very small feet: at a height of 1.74 m, TORO has 19 cm long feet, corresponding to shoe size 31. The physical properties of the ground (e.g. the friction coefficient) and the need to prevent slippage or tilting of the foot or hand in contact with the environment further constrain the direction and amplitude of the forces created at the point of contact. Assuming that we have a generated trajectory for the center-of-mass of the robot, based on the laws of physics we can compute the force acting on the center-of-mass and how to distribute it on the given contact points. The force distribution on constrained contact forces is typically solved as a constrained quadratic optimization problem.

[D.C.] 4. Which is the biggest technological challenge at the current state of the research?

[G.M.] It is difficult to name just one of the challenges we are facing as the "biggest" challenge. For each general area of robotics (sensing, planning, and acting), we are facing difficult challenges: for example, for sensing the environment and the robot's exact position within it we need to combine data from different sensors (gyroscope, accelerometer, camera, force-torque sensors, etc.) into a coherent view; for acting in the environment, we need to control simultaneously all 27 degrees-of-freedom of the robot while taking into account the limitations of the joint motors in terms of maximum torque and maximum velocity, as well as the constraints on the contact forces mentioned previously; and, for planning we want a robot which can react quickly to a given command, which means that the planning algorithm needs to find a solution in a short amount of time. As planning the motion for all 27 joints of the robot would be computationally intractable, we focus on simplified models of the robot. The main challenge is finding the simplified model that retains the main features of the full robot, while at the same time being simple enough to make efficient computation possible. In case of TORO (and other similar robots), the center-of-mass dynamics (Newton's second law of motion) provide such an efficient model. However, finding a feasible center-of-mass trajectory out of potentially infinite number of possible trajectories linking the start point with the end point of the motion is still a very challenging problem.

[D.C.] 5. What are the future explorations and research areas of the TORO platform?

[G.M.] The main research goals for TORO were set in the beginning of the project and will probably not change in the near future: to study humanoid locomotion and to develop the planning and control methods to achieve human-like behavior in various scenarios (e.g., walking on uneven ground, climbing stairs, or balancing). One interesting venue of future research is how to use the robot's own body weight in performing a given task, for example opening a heavy door. Humans do this intuitively, but for humanoid robots it is a challenging problem.

[D.C.] 6. How are potential users reacting to the current functional model?

[G.M.] It is worth mentioning that TORO is a unique specimen, not a series product. Being a research platform developed by our research institute, TORO has no current users outside DLR. However, this doesn't mean that it is a closed platform; visiting researchers from other research institutes or universities perform experiments on TORO on a regular basis.

[G.M.] Humanoid robots are designed to perform tasks that are repetitive, strenuous, or too dangerous for humans. One example is a current collaboration project between Airbus and several research institutes in Europe including DLR, called COMANOID. In this project, a humanoid robot is performing tasks during aircraft assembly which are considered high-risk in terms of human health such as applying anti-corrosion paint inside the aircraft.

[D.C.] 8. A short message for the Cluj-Napoca robotics community?

[G.M.] From the point of view of robotics, we live in a privileged moment in time: the pioneer years. We know so little, and there is so much to learn. As pioneer, anyone can make a contribution with relatively small investments, as a hobbyist, as a research, or in the industry. I encourage you strongly to pursue this field, as there are great things therein waiting to be discovered.